Tet is the most important holiday of Vietnam, but as a traveler, you may be disappointed when everything is not what you expect. Since Vietnam Tet Holiday is just around the corner, we are going to provide you with some must-know tips. 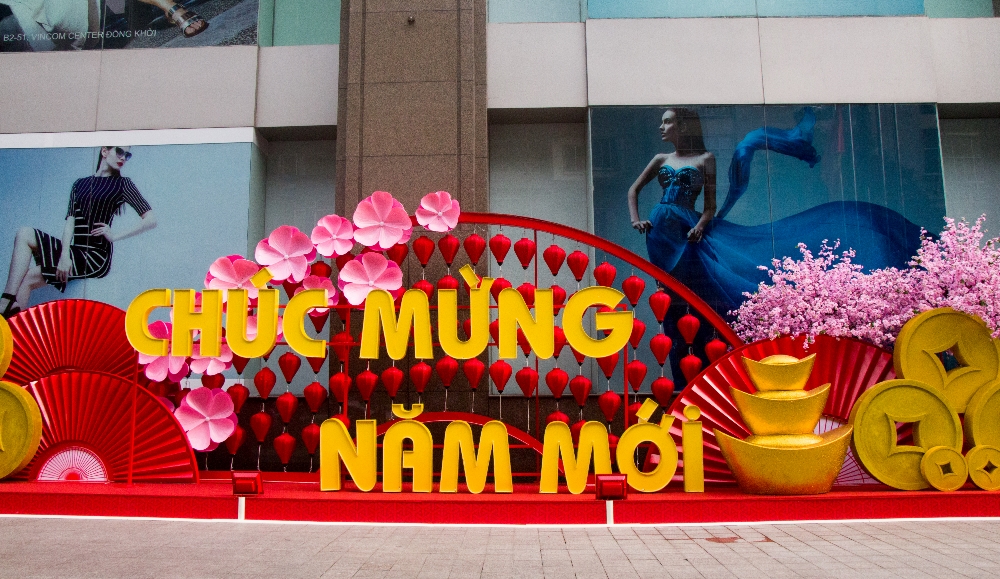 Tet or Lunar New Year is the biggest, the oldest, and the most important traditional holiday of the whole nation. Possessing the same meaning as the Western New Year, this sacred eve is considered as the transition between the old and New Year. Furthermore, for Vietnamese people, Tet hugely affects the local’s conception of life, customs, and beliefs profoundly.

How Is Vietnam Tet Holiday Calculated?

Apart from the widely used Gregorian calendar, the Lunar calendar is only popular in some parts of Asia. Based on the cycle of the moon, a Lunar year usually has twelve months with 30 days each. After several years, there will be a leap-year that has thirteen months instead of twelve. Because three normal years follow every leap year, the first day of the Lunar New Year is never sooner than January 21th and later than February 19. However, it varies from year to year, and falls in late January and early February of the Gregorian calendar.

Exactly When Is Tet Holiday?

Check the Lunar Calendar in 2017

What Is Special about Tet Holiday?

As Tet plays an essential religious role, the whole nation will start preparing for this occasion starting from the previous month. The holiday time often lasts from 7 to 10 days.
The ritual practices mean a lot to the contemporary generation. So let’s see what customs the Vietnamese people always adhere to. 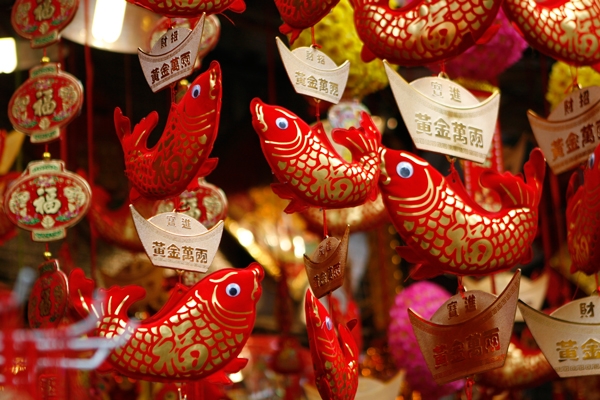 Time: on December 23rd of the Lunar calendar

This seems to be the beginning of the entire holiday. People will clean the kitchen and parole colorful carbs with the hope that they will carry the Kitchen Gods to the heavens. 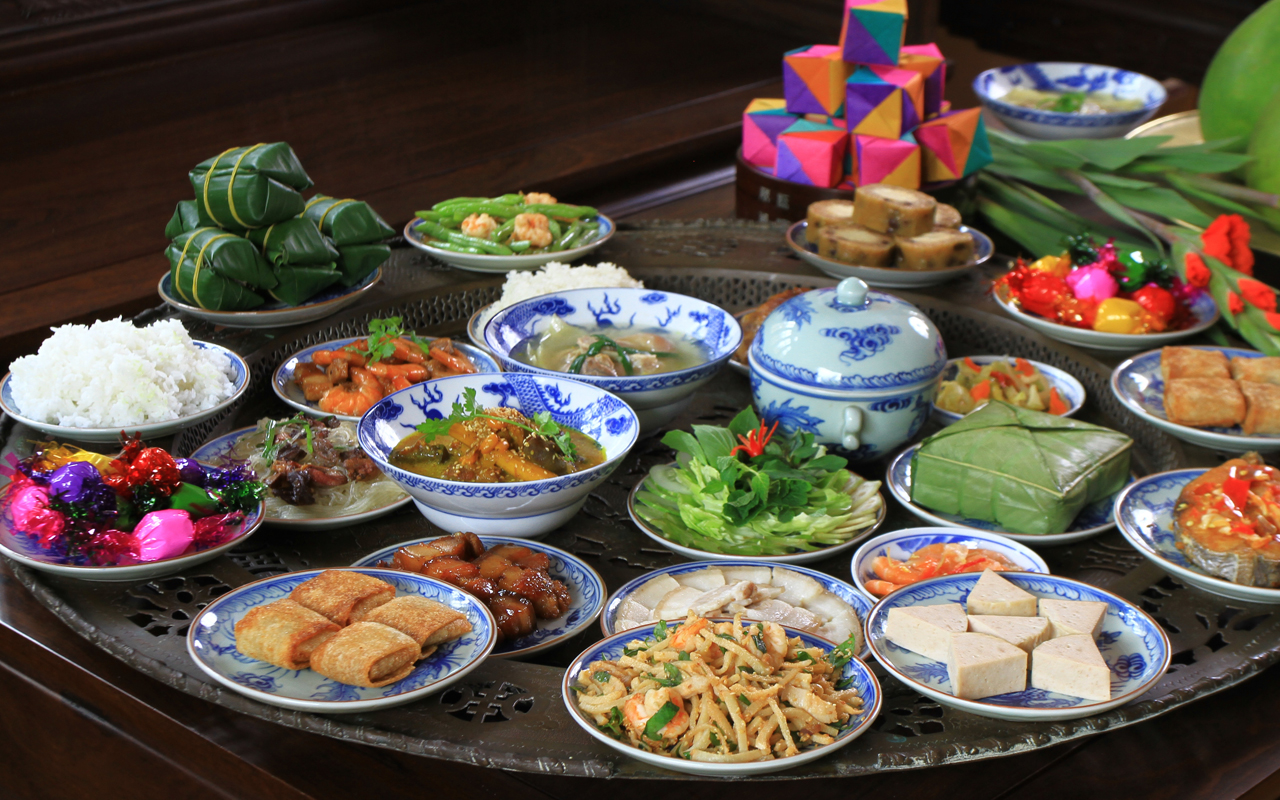 Time: on the last day of a Lunar year

Customarily, by the end of a year, everybody must complete all things left from the previous years. Paying any outstanding debt or dismissing all conflicts are two examples. This is also the time for family reunions and parties. 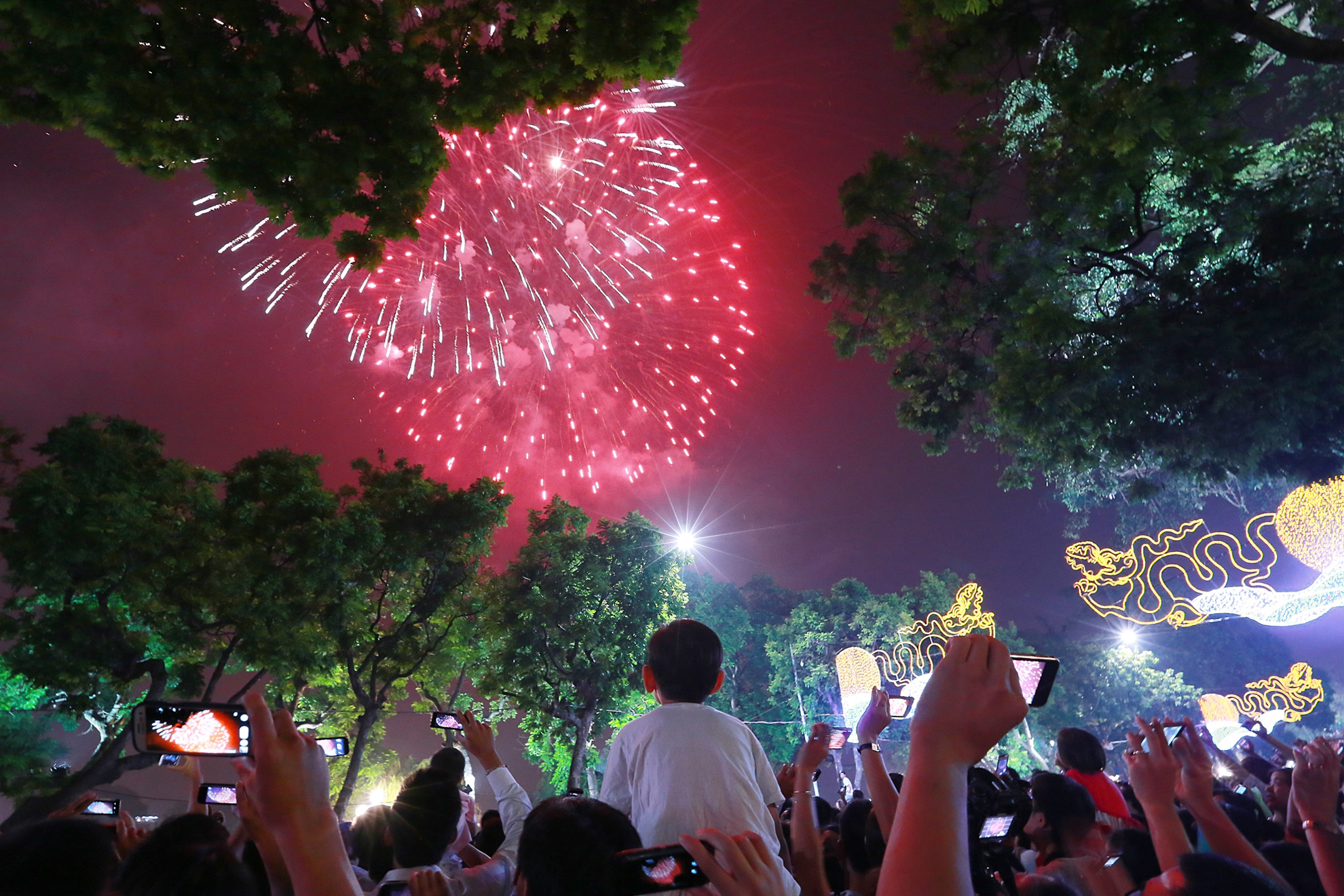 Time: at midnight of the New Year’s Eve

At this time, locals will begin praying to God and their ancestors for a year full of health, happiness, luck and prosperity

4. The First Days of Tet 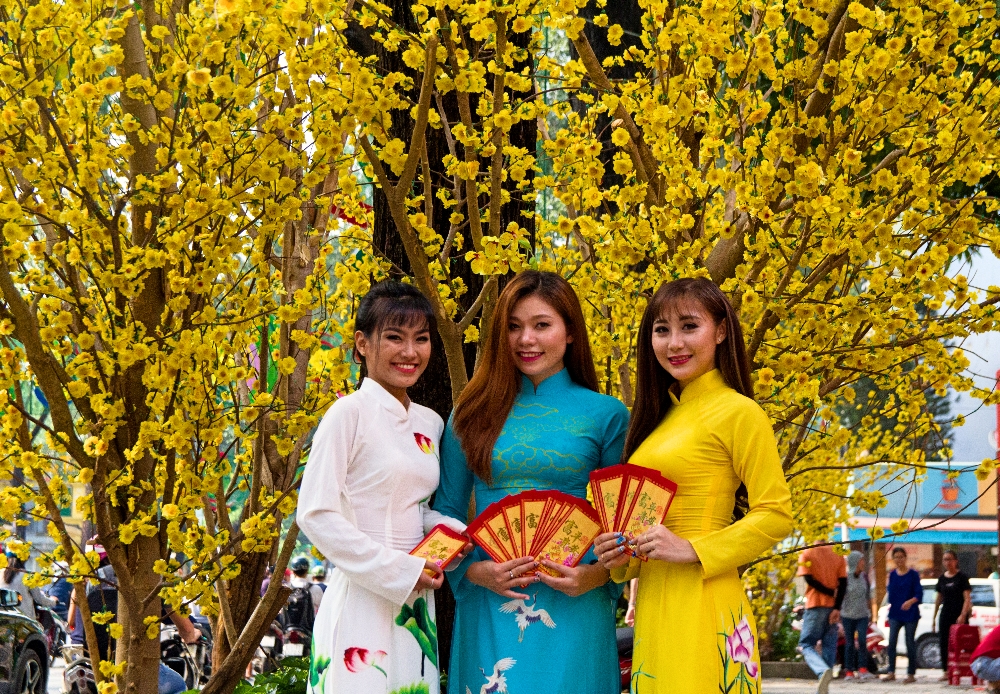 Time: Usually from the first to the sixth day of the New Year

The Vietnamese spend their first days of the Lunar New Year with their beloved ones. In particular:

Cleaning is an important aspect of Tet holiday. The Vietnamese believe trash, dust, and debts are unlucky things that need to be cleaned up before New Year Eve.

There are numerous ornaments hung up to decorate one’s space, and some main characteristics and types include: 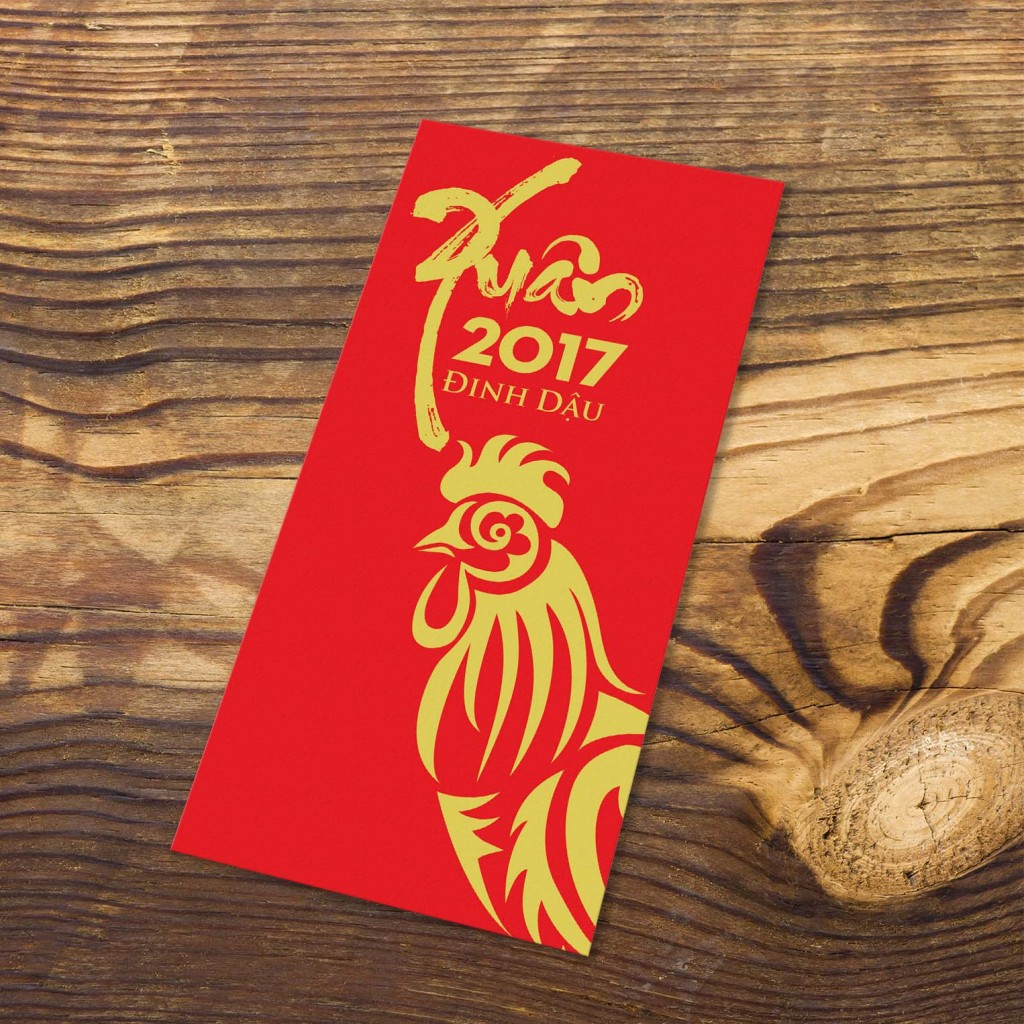 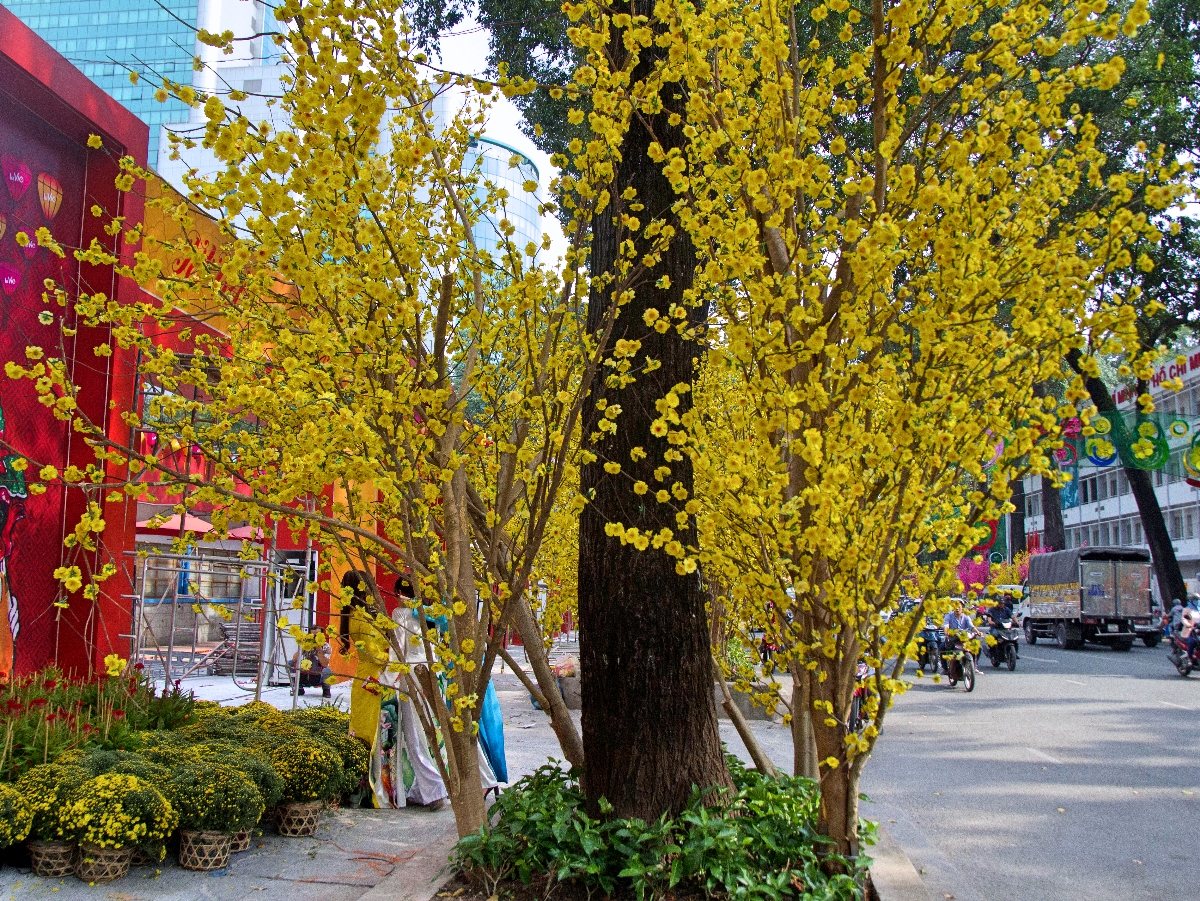 Flowers and trees: This time of the year also falls under the spring season of Vietnam, so you will see many flowers decorating streets and houses. The popular types of flowers include Hoa Mai Vang (Yellow Apricot Blossom), Hoa Dao (Peach Blossom), Cay Quat (Kumquat Tree), Hoa Van Tho (Marigold), Cay Neu (The New Year Bamboo). 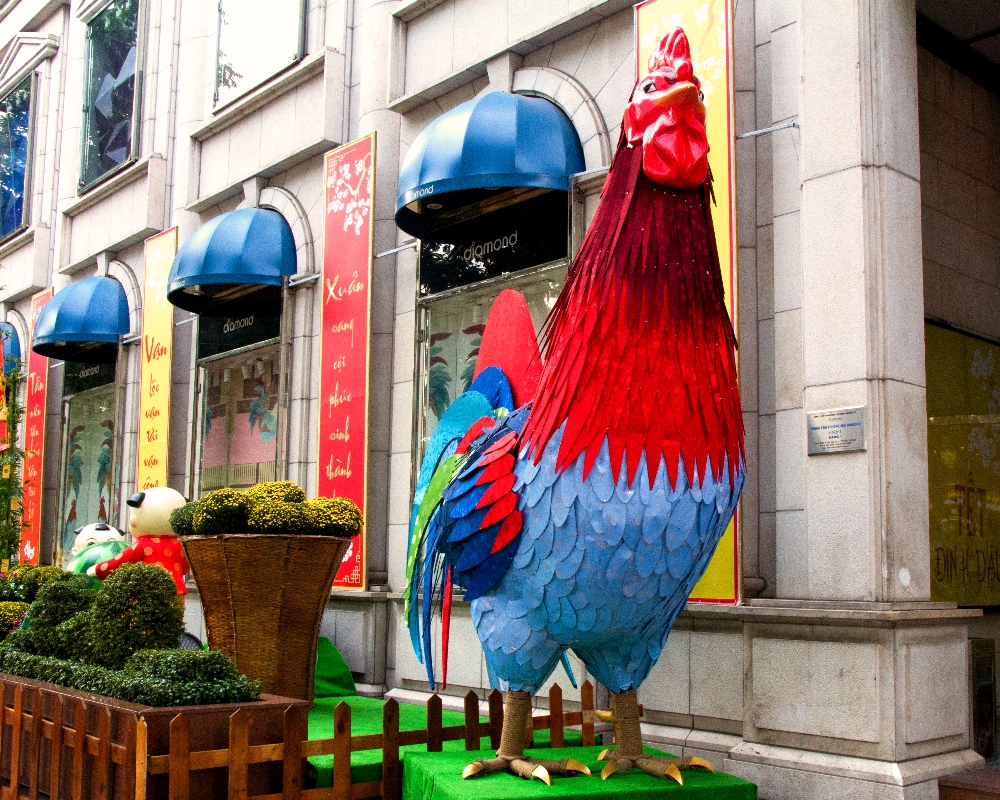 Mascot: Annually, the decorations will be consistent “Con Giap” – the zodiac animal of the year. According to Vietnamese tradition, there are a total of twelve animals and each will represent a Lunar year. So since 2017 will be the Year of the Rooster, you will come across many decorations featuring an image of a rooster. 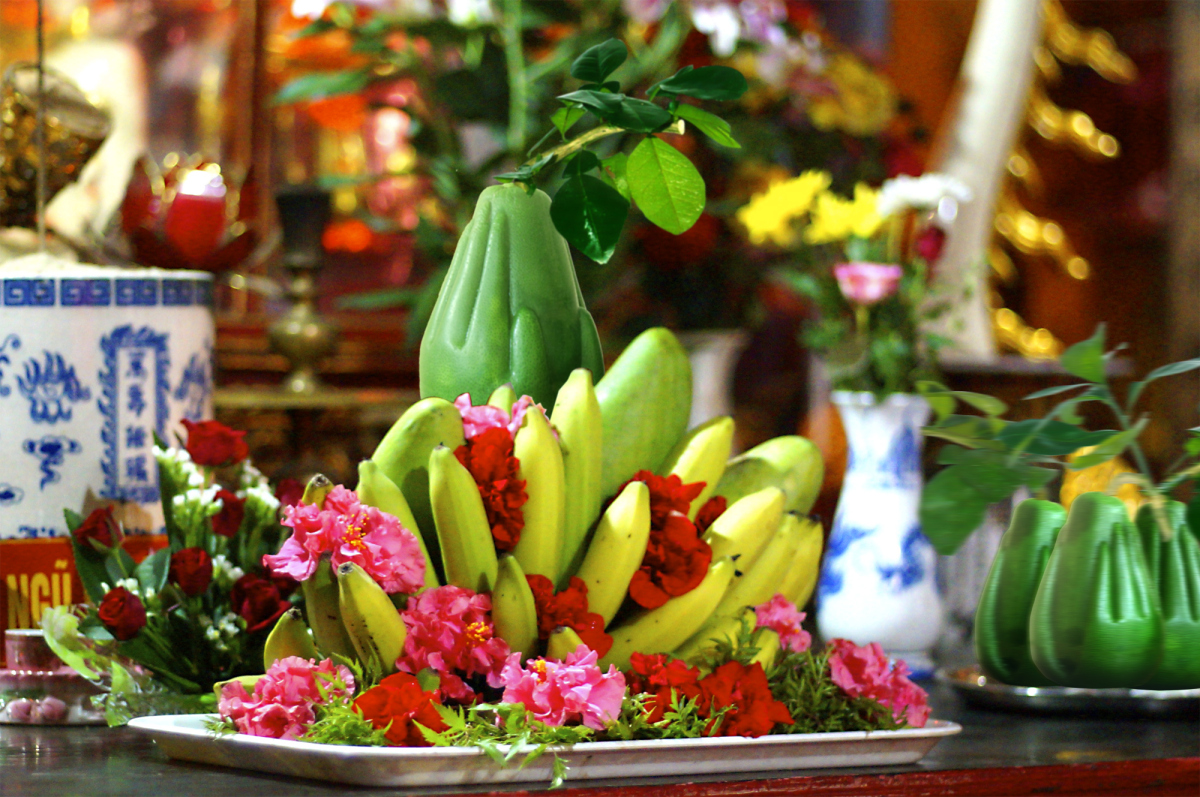 Five–fruit tray: Mam Ngu Qua or the five-fruit tray is an integral part of the traditional New Year’s Day of Vietnam. Each fruit presented on the tray has a specific meaning, and depending on the regional differences, the fruits vary between three areas of the country. Basically, Mam Ngu Qua includes Cau – Sung – Dua – Du – Xoai (Soursop – Fig –Coconut – Papaya – Mango). 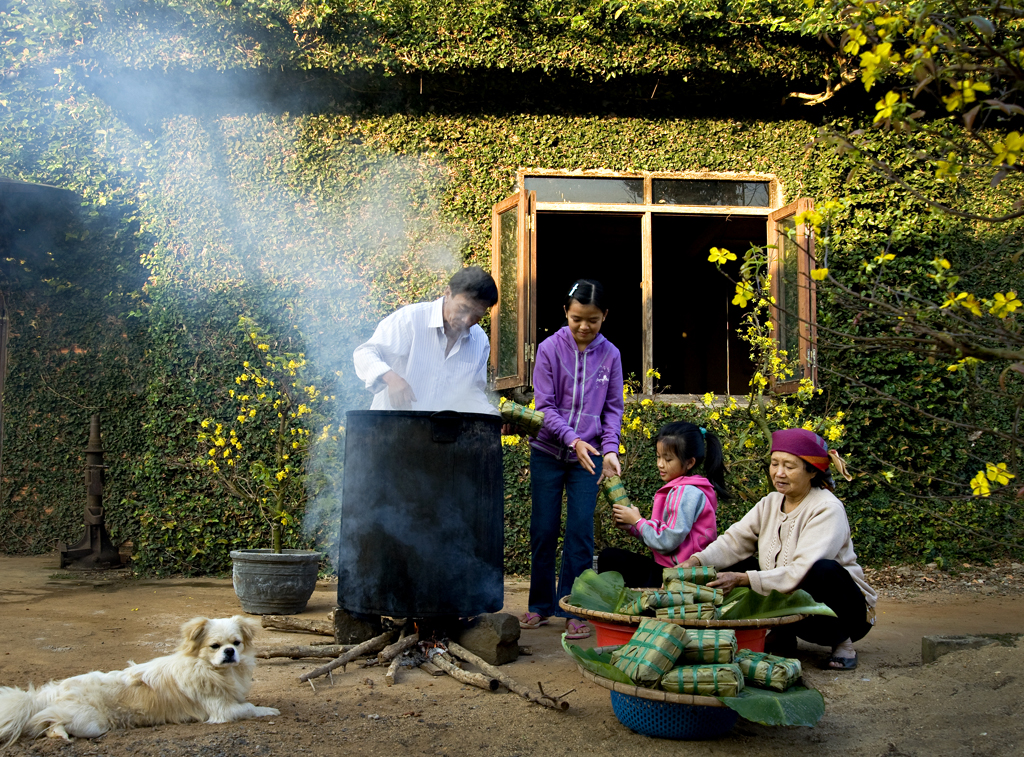 Today, more and more families decide to buy ready-made cakes instead of making them at home. However, it still remains a tradition that the whole family sits around a huge cake pot, telling each other stories and laughing joyfully as the cake is prepared.

Giving New Year’s greetings and lucky money (Chuc Tet & Li Xi) is a long-standing tradition to wish good things for one another in the upcoming year. Traditionally, people exchange New Year’s wishes, while children give greetings to their grandparents, parents, and relatives and receive the lucky money from the adults. It is believed that money put inside exquisitely decorated envelops may bring luck to the recipient.

5. Xong Dat (The First Caller to A House)

Also, there is another rite called “Xong dat”, or the first visit to a house. It is believed that the first guest entering a house has a huge impact on how the following year will pan out for the residents of the house, so people tend to invite a cheerful, tidy person to their home as the first guest. Most of the time, people choose this person based on his/ her zodiac, and whether or not it is suitable to the homeowner.

It is believed that the first guest entering a house has a huge impact on how the following year will pan out for the residents of the house, so people tend to invite a cheerful, tidy person to their home as the first guest. 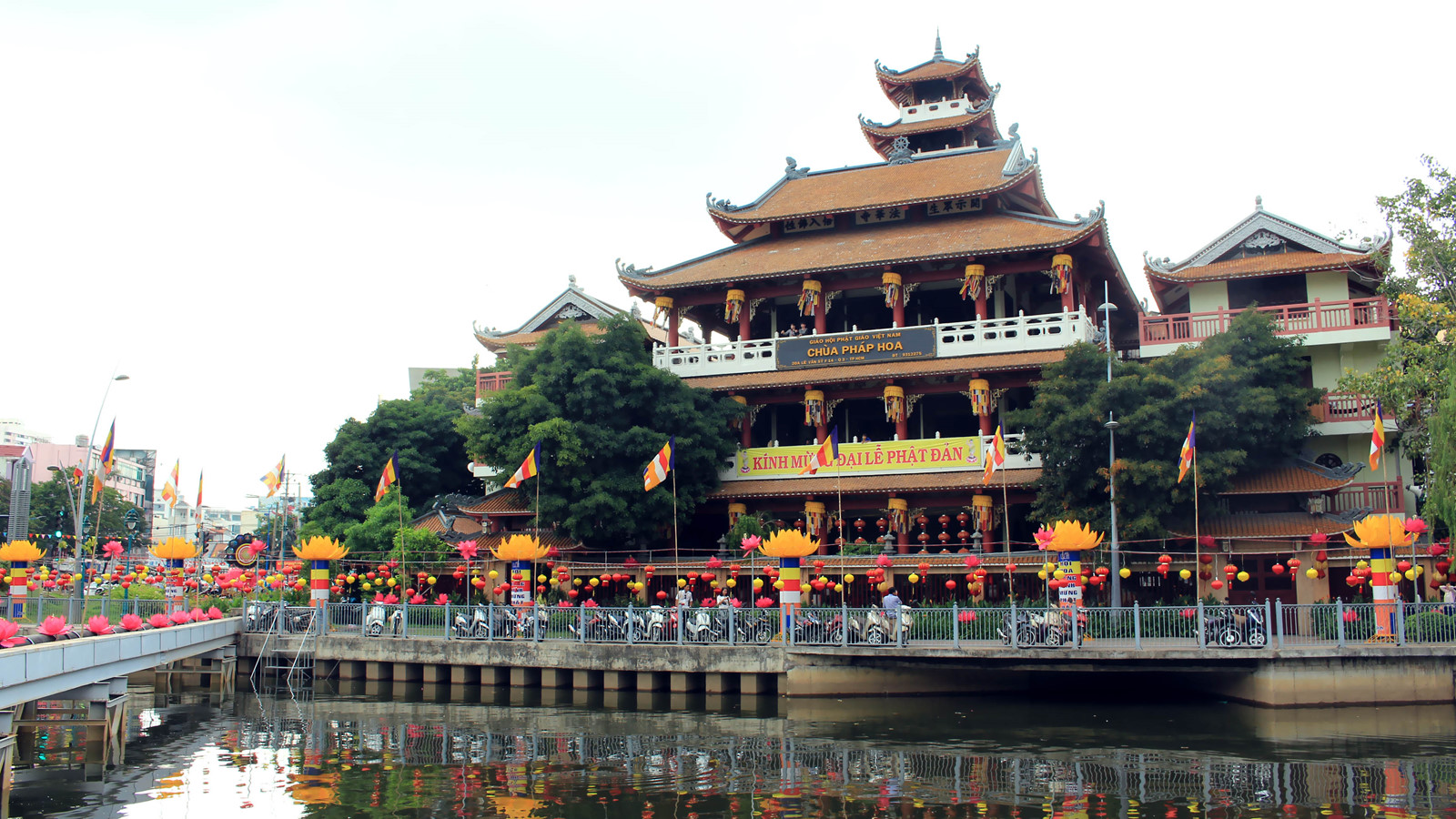 Buddhism plays a major role to the Vietnamese. Therefore, in the beginning of the year, pagodas are more crowded than ever. People come here to pray for a wonderful year.

Because of the spiritual importance of the New Year, people tend to avoid doing things that can bring bad luck to oneself. As a traveler, you should check out these taboos in order not to cause annoyance to the locals: 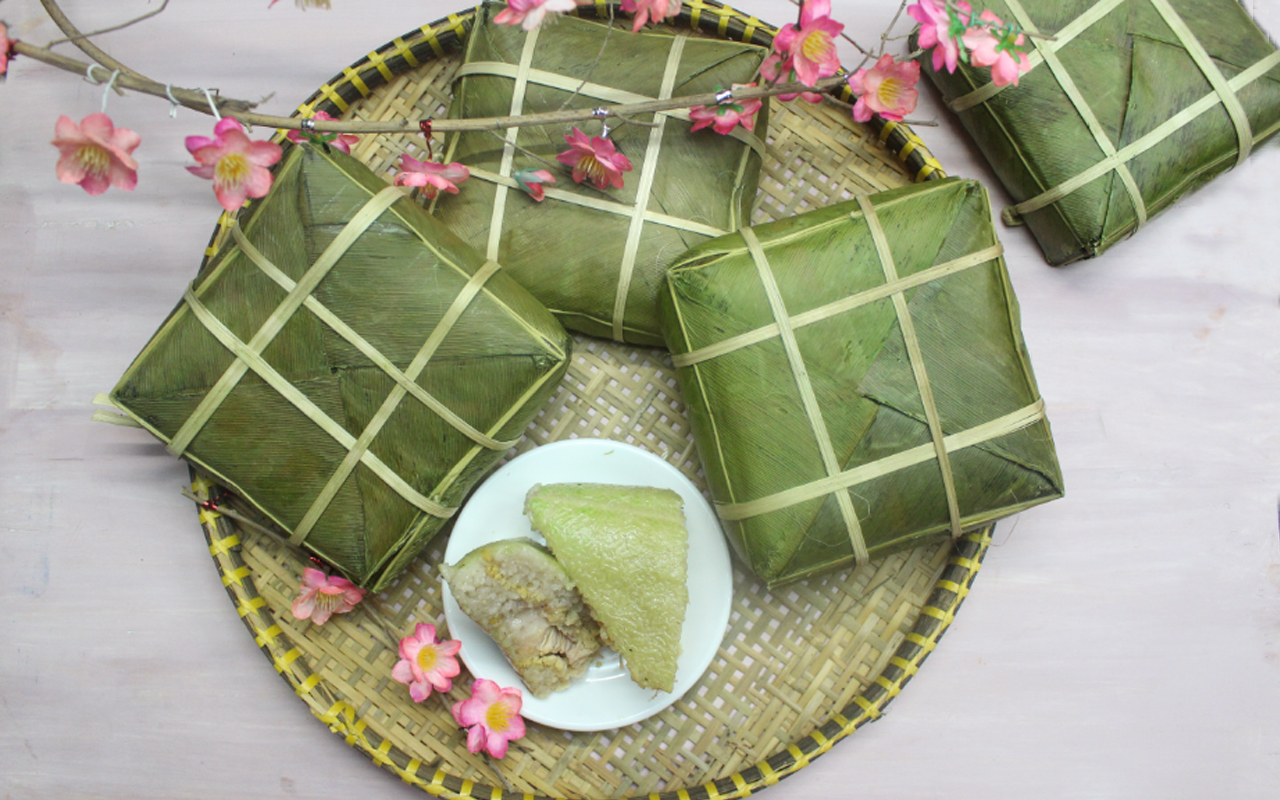 Banh Chung is a food made from glutinous rice, mung bean, and pork, covered by la dong (phrynium leaves) or banana leaves. According to old legends, banh chung appeared on the Hung dynasty. The cake is green and square, symbolizes the earth, and known as an indispensable dish for Tet. About one or two days before Tet, families usually get together around a pot to make banh chung as they laugh and reminisce about old times. 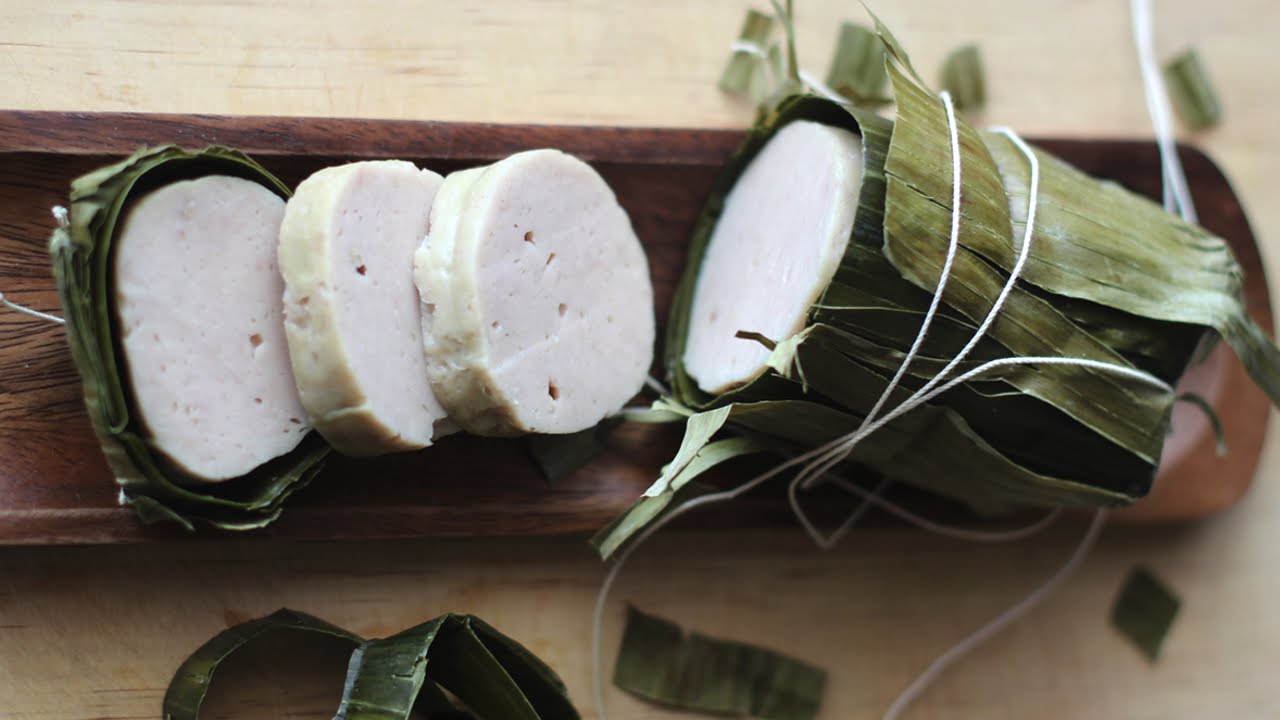 Gio cha (Vietnamese ham/sausage) is one of the main foods available in Tet Holiday, and is often eaten with starchy food. 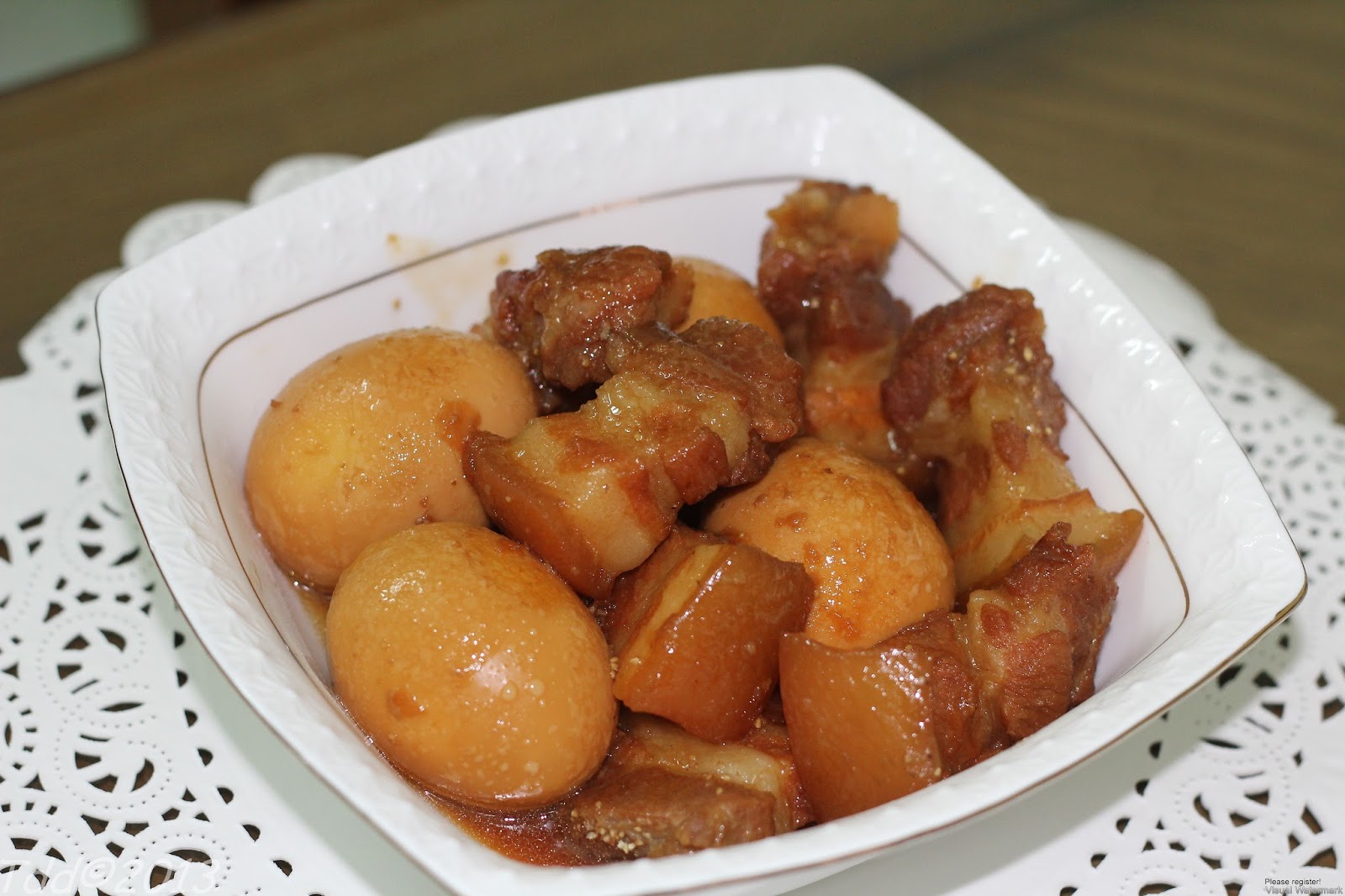 The tastiest of pork parts is braised with duck eggs or quail eggs, creating a dish that is very easy to eat. The Vietnamese believe that thit kho trung will bring them good health and peace to all family members. 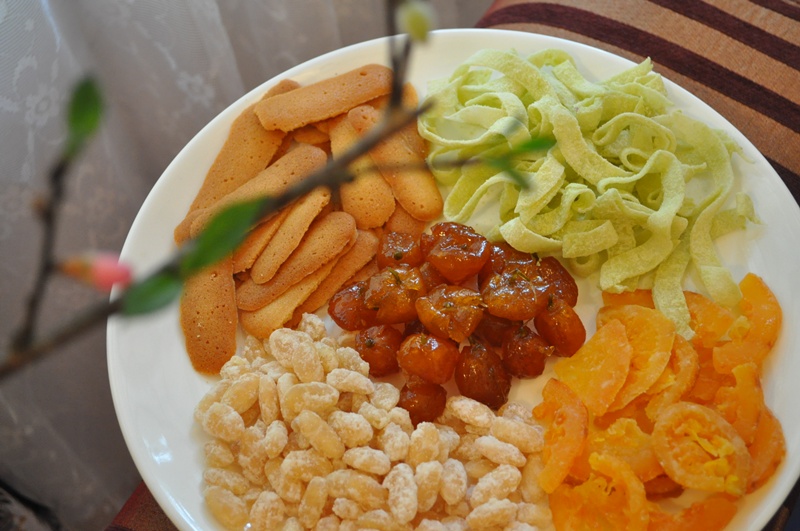 Mut tet is not a course to serve during a meal in Tet holiday, but more like a snack to welcome guests in this special period. This once-in-year mix of snack is very large in variety, with so many ingredients: ginger, carrot, coconut, pineapple, pumpkin, lotus seed, star fruit, etc. 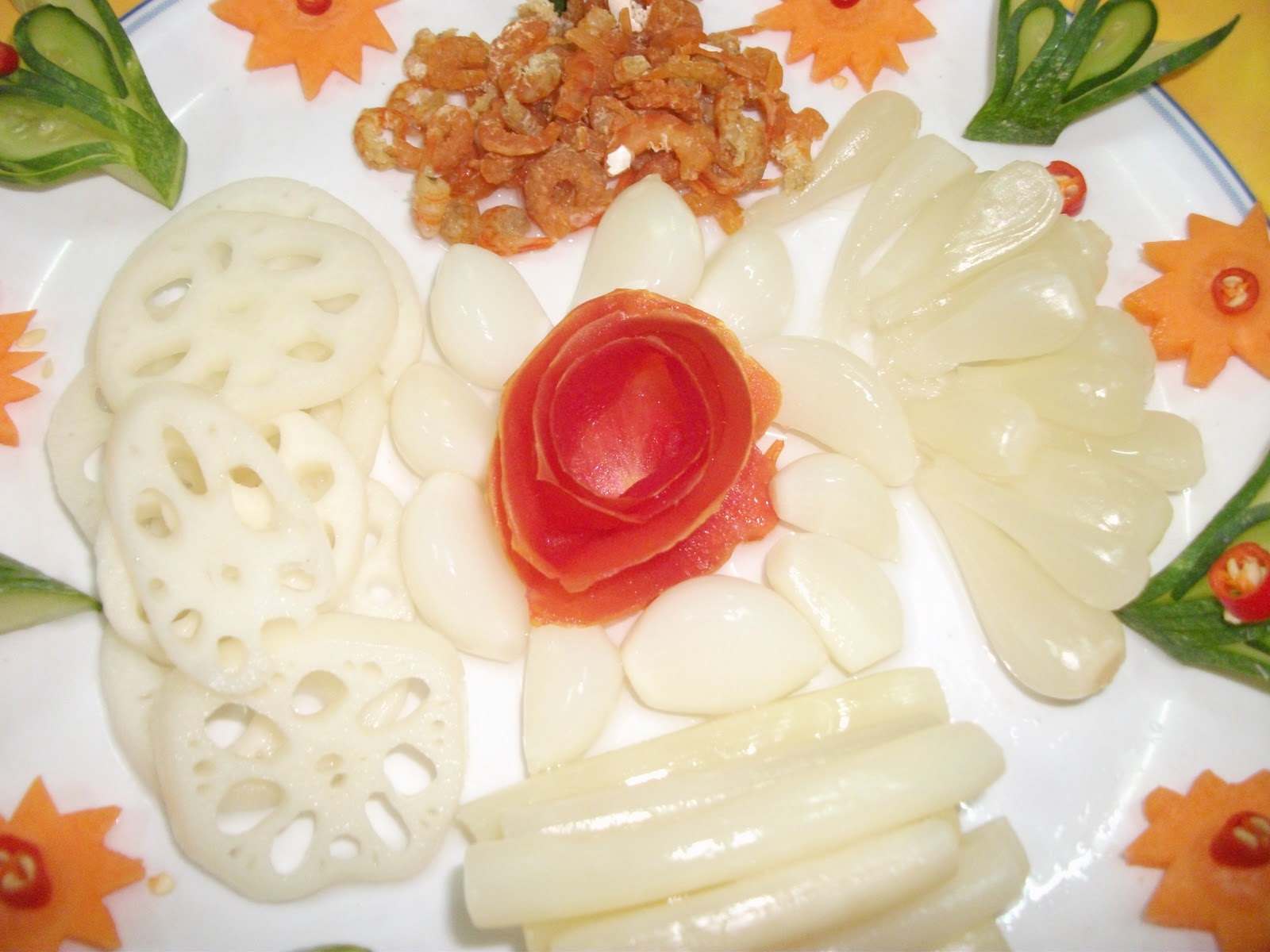 Tet is definitely a fairyland for pickle lovers. There are various recipes to make pickles – some may be made of onions, carrots, garlics, turnips, etc. This is a food commonly served with oily dishes during the holiday.

Tips for Travelers during Tet Holiday

Officially, in 2017, Vietnamese people will have 7 day-offs, from January 26th to February 1st, which may cause some inconveniences during your stay here. Here is some advice for a smooth stay:

This is one of the biggest concerns that seem to annoy most holiday visitors. Since Tet is a time for family reunion, the demand for transportation, therefore, increases insanely. Most tickets are fully booked months before Tet and you may have to spend two or three times higher on the cost for transportation and also experience delays. 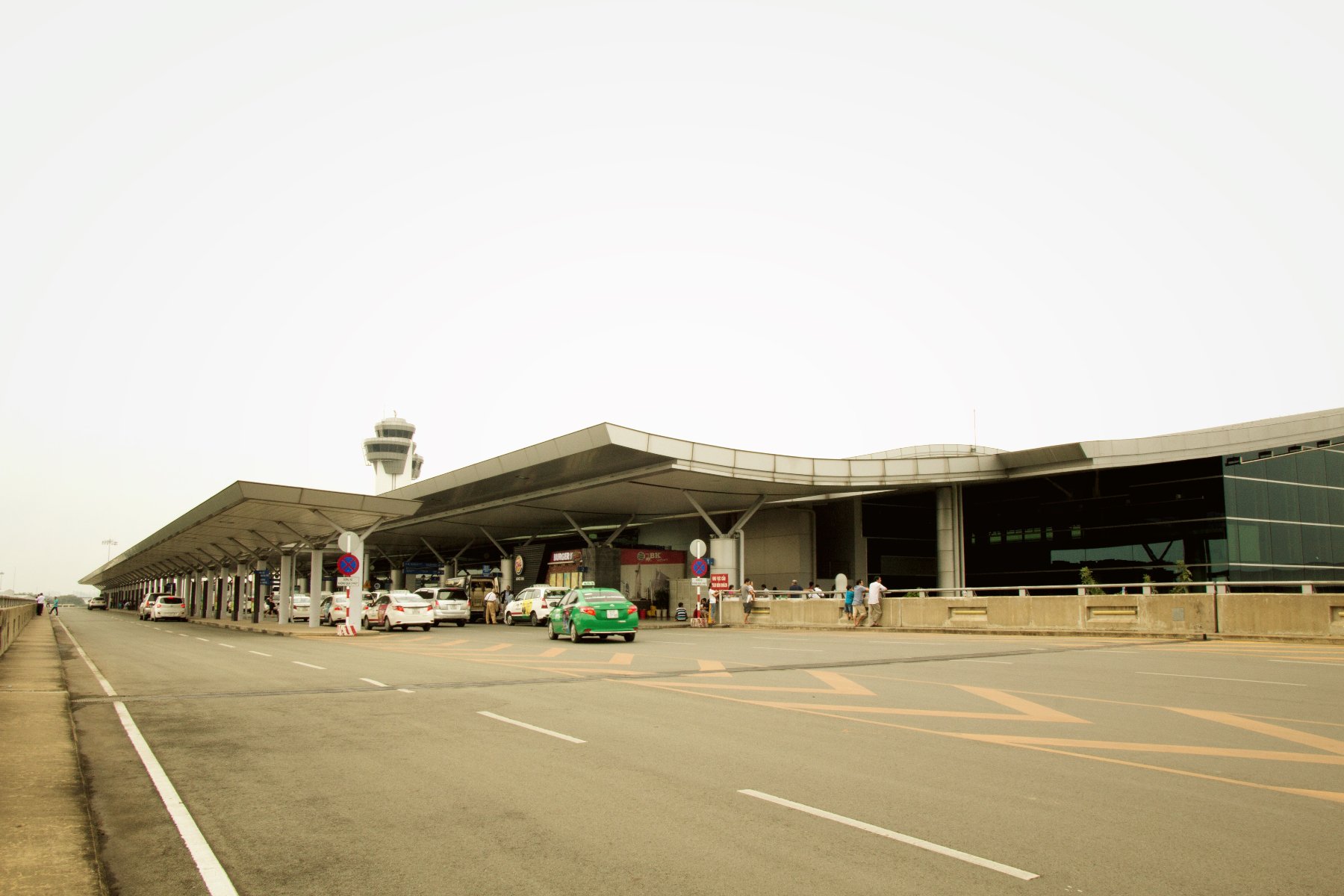 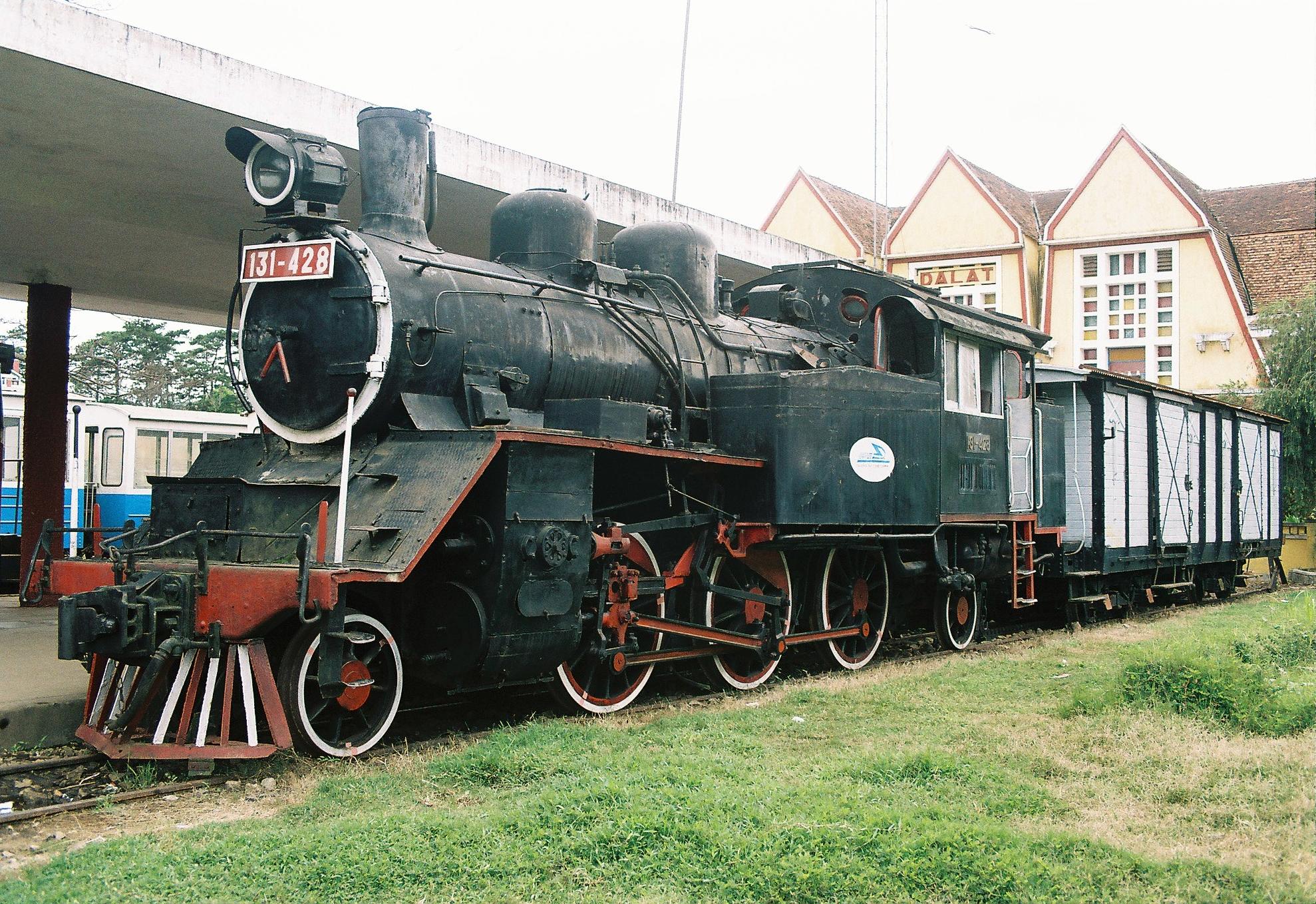 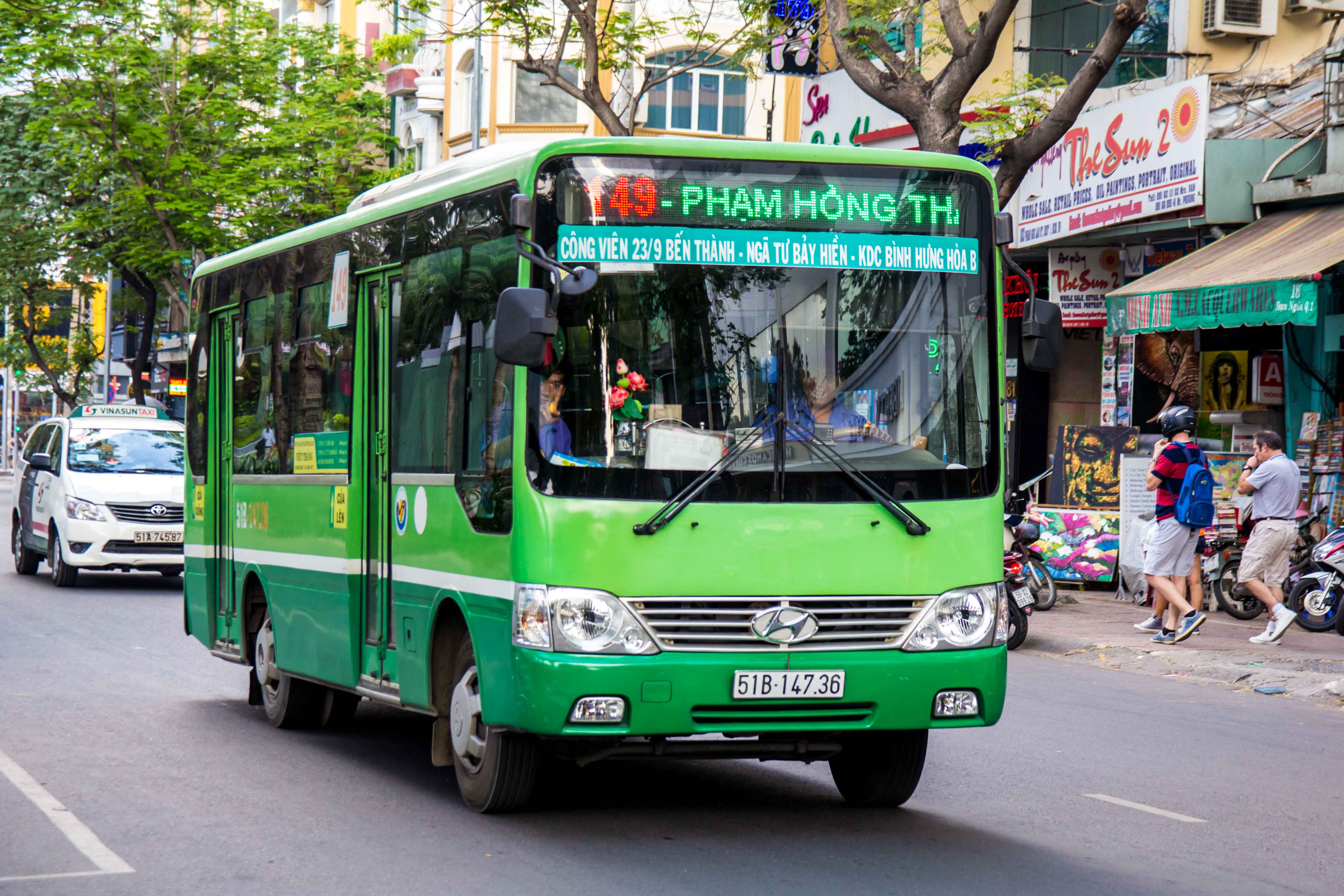 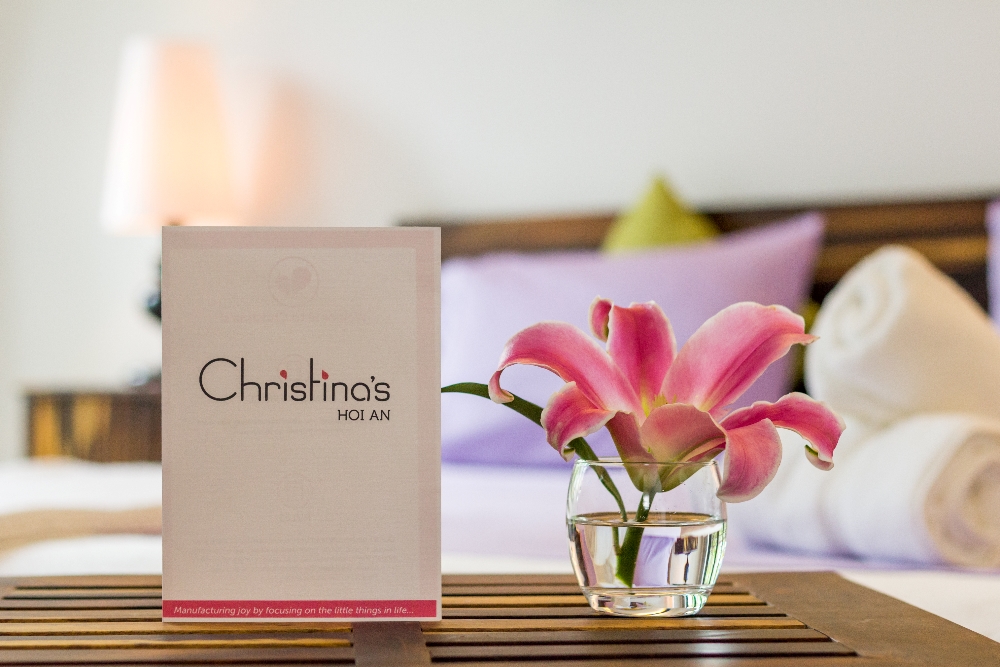 Unlike popular myths, accommodations in Vietnam during Tet are abundant. Some hotels also organize New Year celebration parties, so don’t forget to check with your hotel in advance to be part of the fun. Do be aware that prices may be higher than usual.

Where to Stay in Saigon

Where to Stay in Hoian 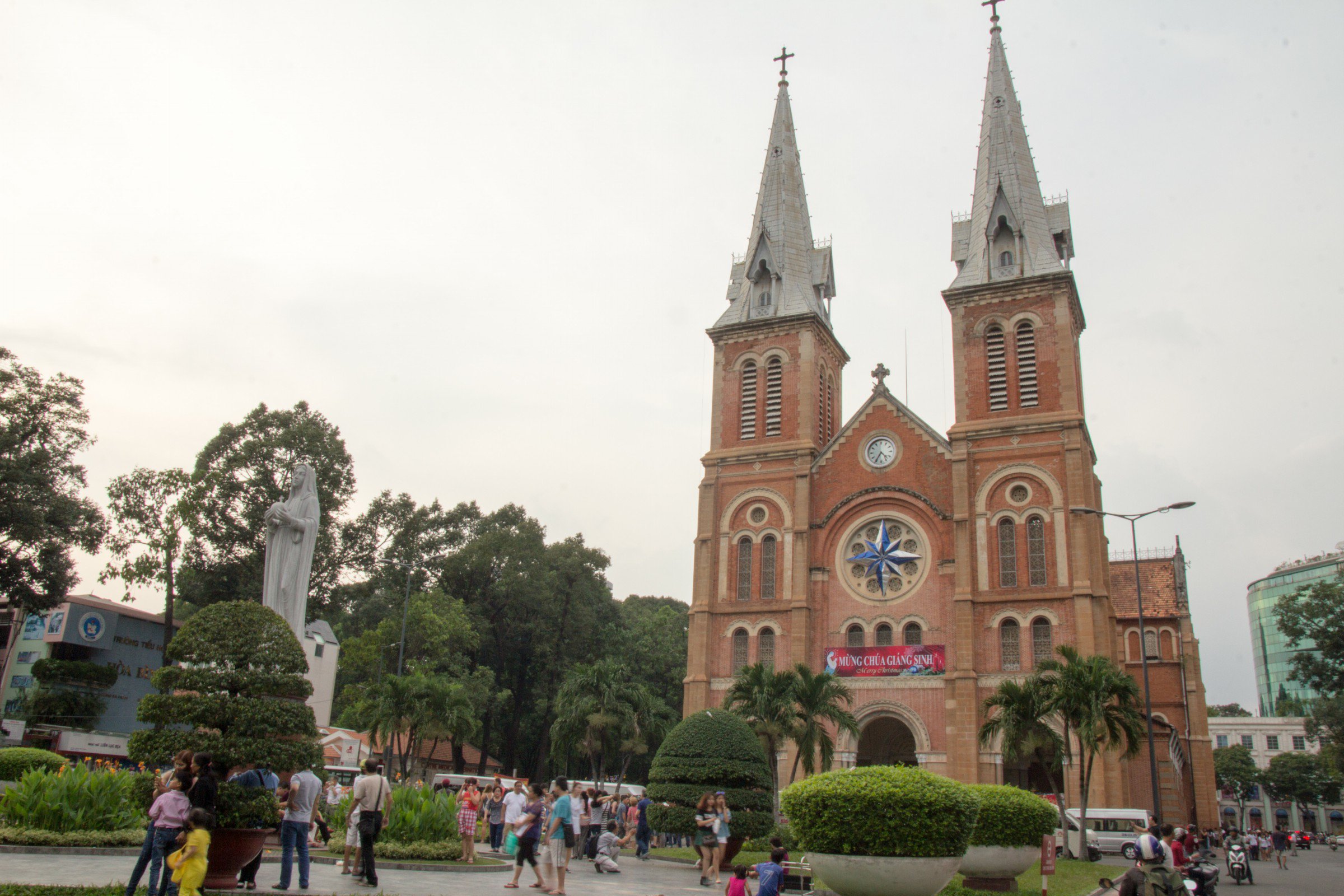 Many tourist attractions like museums, mausoleums, indoor exhibition places, and art galleries will be closed during the holiday. Let’s check in the end of the article to have the detailed information about the holiday schedule of tourists attractions in Ho Chi Minh City.

Read more: The Top 5 Places in Saigon Most Travelers Miss 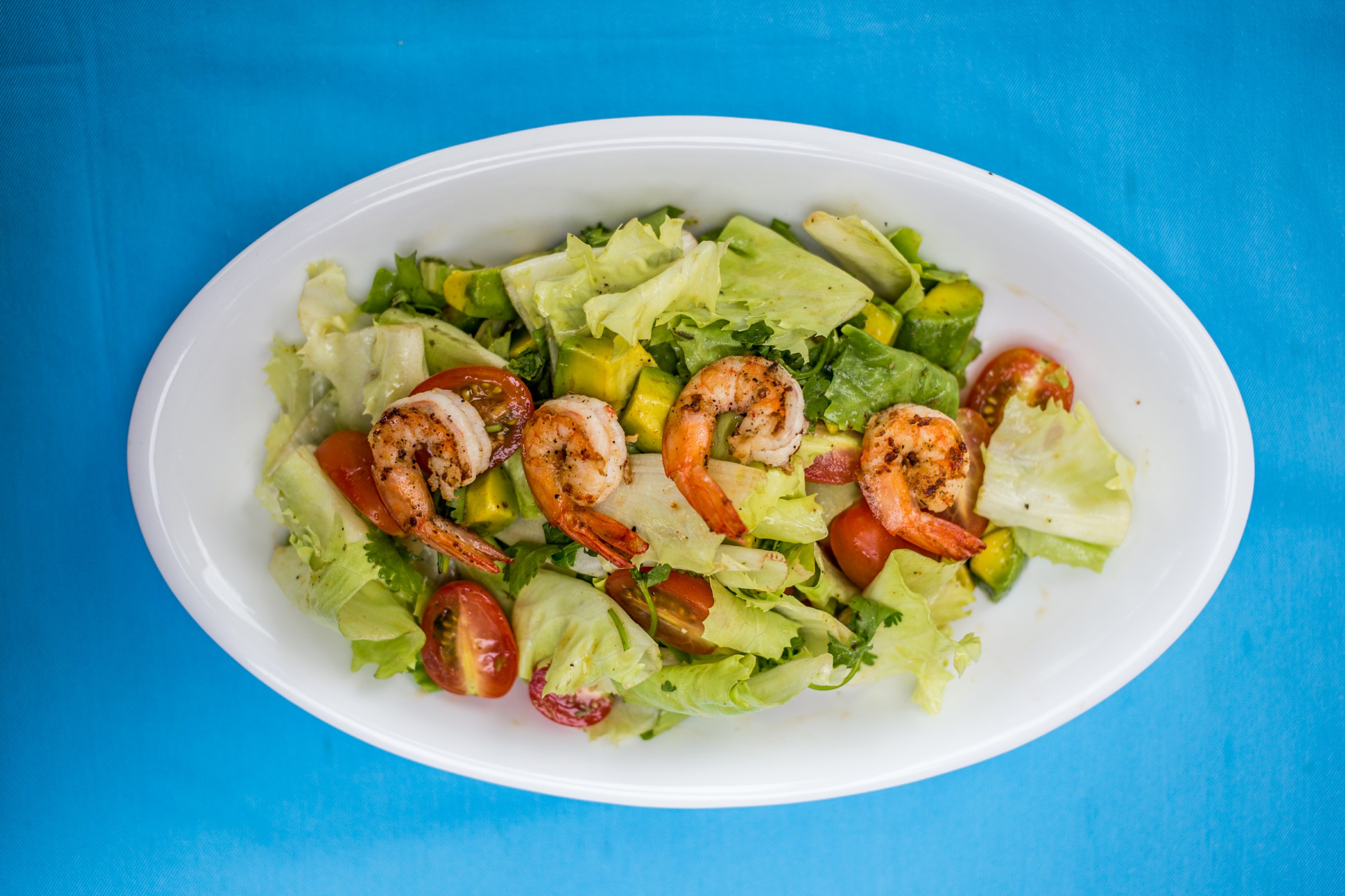 During Tet Holiday, restaurants and coffee shops also take some days off, occasionally December 30th and January 1st of the Lunar calendar, which correspond to January 27th and 28th, 2017. 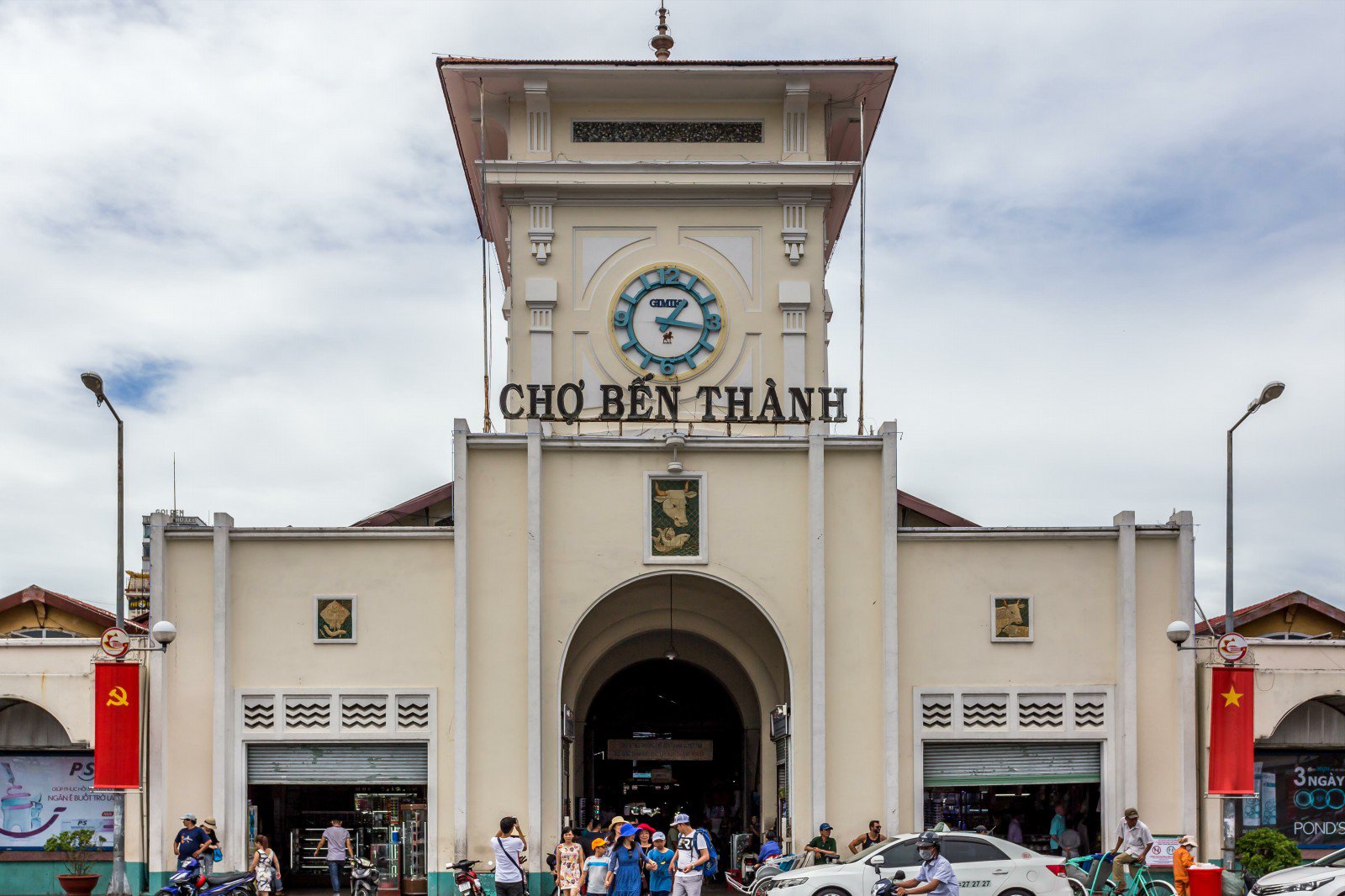 Local markets, super-markets, shopping malls also take days off for Tet holiday, ranging from 2 to 3 days (ie: from January 27th to 29th for this year). 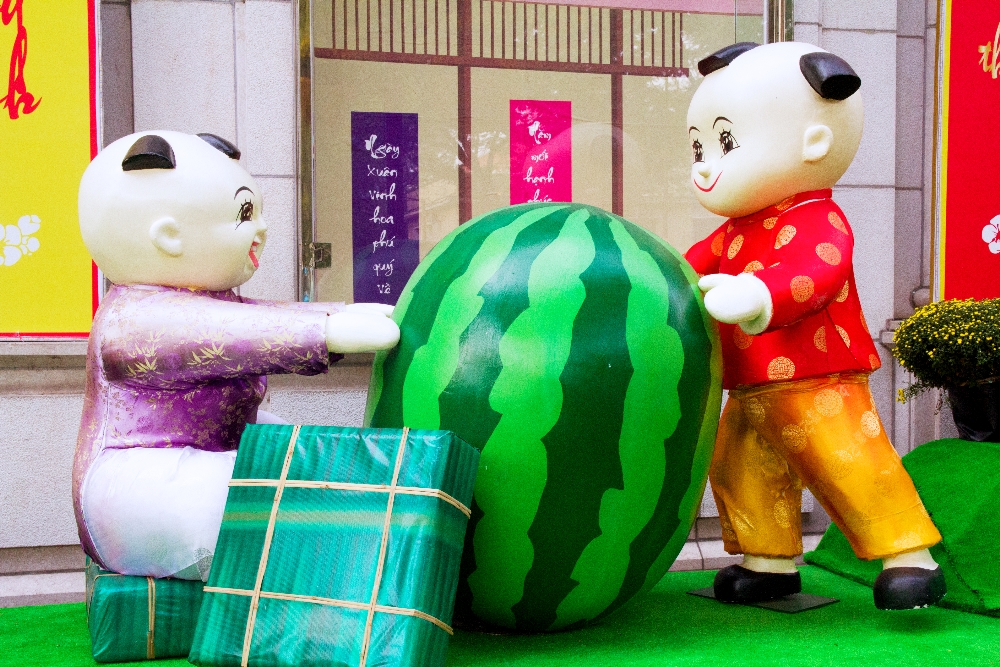 Tet, overall, is not the soundest choice for your visit to Vietnam due to the importance of the holiday to the locals and hence the difficulties you may come across in services. In this occasion, travelers may not be able to fully experience the daily hectic rhythm of life. However, this occasion will be more interesting for big fans of culture. Besides, if it is possible, arrange your trip to spend less time in big cities and more time on off the beaten track destinations. Let us know how it goes in the comments!

Enjoyed this article and would like more fun information on what to do, see and eat in Vietnam? Follow us at the Christina’s blog!

The post The Ultimate Travelers Guide to Vietnam Tet Holiday appeared first on The Christina's Blog.